Shanxi Lu'an Shigejie Zhihua Biotechnology Co., Ltd. is a wholly-owned subsidiary of the world's top 500 Shanxi Lu'an Mine (Group) Co., Ltd. In 2012, Lu'an Group began to invest in the construction of the Shanxi Lu'an oil peony industry base and vigorously develop the oil peony industry. The company started the field cultivation and planting methods from the source of nursery, and established a standardized breeding chain for planting and variety breeding. The base independently developed a special seeding machine for oil peony, seedling machine and planting machine to realize the standardization, scale and mechanization of field seedling and planting. As an emerging strategic industry of the Lu'an Group, the “Million-mu oil peony eco-industrial integration plan” was steadily implemented to expand the area of oil peony planting, and strive to achieve a planting peony planting scale of more than 400,000 mu at the end of the “13th Five-Year Plan”. At the end of the 14th Five-Year Plan, the planting scale reached 1 million mu, and a 50,000-ton/year deep processing project was completed, which was called the “Zhihua Tianbao” brand.

In 2014, Zhihua was designated as the first R&D base by the Oil Peony Engineering Technology Research Center of the State Forestry Administration.

In 2017, Zhihua oil peony planting base was listed as a national agricultural industry standardization demonstration zone by the National Standards Committee.

Oil peony is used as a strategic emerging industry of the Lu'an Group. It is based on the principle of increasing production and increasing efficiency, supporting varieties, combining agricultural machinery and agronomy, and producing ecological coordination. To carry out integrated development of oil peony seedling, planting, processing and sales industries; to create an internationally competitive oil peony industrial chain through enterprise management, market operation, industrialized operation and large-scale layout, and build it into domestic oil Peony leading enterprise. 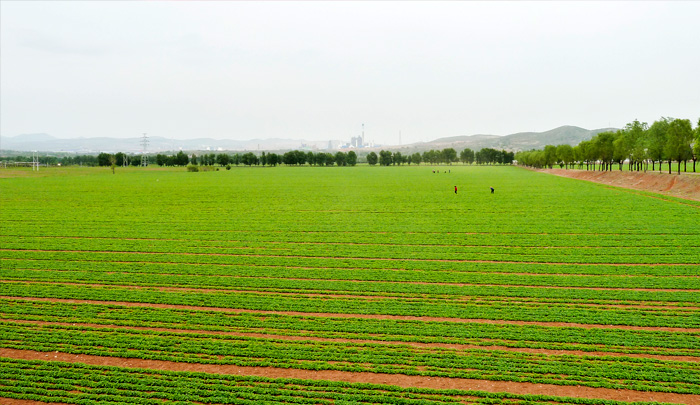 In order to better improve the quality of seedlings, the whole process of breeding and breeding is strictly in accordance with advanced technological processes.

The selection, sowing, planting, field management and mechanization of the seedlings have greatly reduced the damage of seedlings and greatly improved production efficiency.

The oil peony is all treasure, the flower leaf and the flower core can be made into tea, the pollen can process cosmetics, health care products, the seed shell can process medicine, the peel can be refined to produce flavonoids and peony proanthocyanidins, and the fruit pod can produce peony polysaccharide, seed cypress It can produce polysaccharide glue, and the root bark itself is an important Chinese herbal medicine “Danpi”, and the industrial chain is very long. Based on the development of industrial technology innovation, Zhihua will gradually extend the industrial chain to produce high-end cosmetics, health products, medicines and food products, laying a foundation for the production and development of Lu'an Group green agricultural products.

The base introduces German advanced cold-pressing equipment and adopts the international cutting-edge physical pressing process to extract the virgin crude oil extract. The whole process is not treated by high temperature, avoiding the generation of harmful substances in the high temperature processing process, and retaining the active substances (unsaturated fatty acids, vitamins) in the peony seed oil to the utmost extent, greatly improving the quality of the peony seed oil.

After years of research and exploration, the company has accumulated rich experience in the bio-health industry.

Established a strong scientific research cooperation platform with many well-known research institutes, institutions and enterprises in China to carry out integrated cooperation in production, education and research.